The torticollis, also known as wry neck, is a rare disease of great social and emotional impact . The head is generally tilted to one side and the chin to the other. The body posture may change with kypho-scoliotic deformities.

Torticollis begins with an abnormal contraction of the neck muscles, especially the sterno-cleido-mastoid (SCM ). This SCM shows anteriorly on the neck, converging from left and right toward the sternum (see figure, the left SCM in green). It controls almost every movement of the head. In patients with torticollis, it appears as taut as a rope, predominantly on one side, and causes head deviation. Other muscles deeper and less visible on the skin surface are also involved and contribute to the abnormal posture . 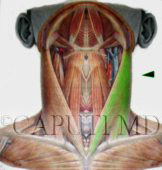 Involved muscles can’t relax, even when they should , altering the head movement and posture. Over time the postural alterations affect the whole body, causing spine deformity and the patient is forced to twist the trunk to look forward.  A normal posture may temporarily reappear  with a “gest antagonist” typically the index finger on the chin which correct the head deviation.

Torticollis or cervical dystonia can occur at any age, even infancy, most often occurs in middle-aged people, women more than men. Symptoms generally begin gradually and then reach a point where they don’t get substantially worse.It is considered a segmental distonia because affecting a single body regiuon.  The cause is may be a vascular conflict, but often the cause it is not known. Occasionally it follows an infection of the central nervous system, called encephalitis.

The patient at first complains of a sense of tension or even pain in the neck, which may suggest an arthritic or spondylotic disease. In our study, 7 patients had already undergone spinal surgery for cervical spondylosis. Results were published on ” Stereotactic and Functional Neurosurgery ” , and gained the cover page as seen in the image below.
Muscle spasms with sudden head rotation characterize torticollis and the head remains permanently deviated between spasms. Head movements are clumsy and restricted, and rotation opposite to the head deviation is almost impossible. Some instant release may be possible with “gest antagonist”. The need to establish and maintain a visual horizon, induces complex postural changes  and kypho-scoliotic deformities. Such deformities may regress after succesfull surgery, as shown in figure.

Early medical therapy  with benzodiazepines , muscle relaxants, haloperidol , painkillers and others, helps alleviate the symptoms. Periodic injections of botulinum toxin (Botox) are currently the most effective conservative treatment. They warrant muscle release for several months (3 to 6) but results are not always satisfactory.

A case study with a patient photographed before surgery, and then after undergoing surgery at one and two year follow -up . Pleasee note the progressive improvement and how properative kypho-scoliotic deformity were completely gone at two years follow-up.

If conservative therapy is ineffective, surgery is appropriate. There are basically two types of approach : one aiming at small areas deep in the brain  (within the basal ganglia ), that regulate complex movements;  one aiming at the spinal accessory nerve where it emerges from the spinal cord, after identifying small rami directed to the spastic muscles. Alternatively the branches of the spinal accessory nerve are identified and cut on the periphery, underneath the affected muscles. 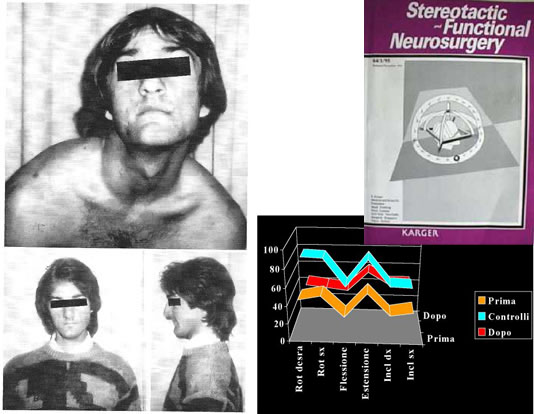 The picture shows one of the erliest cases, about 30 years ago. To the bottom right, in the same frame,the diagram shows how the neck motility improve after surgery (red line) and is similar to normal neck motility (blue line). The other line (ocher), shows the preoperative range of motion. This study has been shown on the cover of a prestigious journal: Stereotactic and Functional Neurosurgery.

More recently it has been introduced deep brain stimulation, but the results are uncertain and still experimental . We aim at the spinal accessory nerve where it emerges from the spinal cord, as described  by Prof . Nashold and where a vascular conflict may be assessed and cured.

In past years we published a detailed study on 59 operated patients, 85 % of whom had good results. In 53% of cases the results were excellent with complete postural realignment.
We also demonstrated that head alignment improved in both static and dynamic conditions . The graph shows these results (the ocher line represents the preoperative condition).