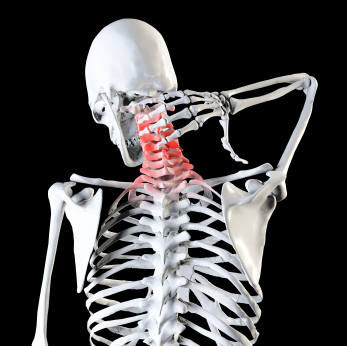 Cervical or lumbosacral level radicular involvement of the nerve roots (radiculopathy) is one of the most common reasons for which the electromyography is required.
The cervical or lumbosacral pain is often a result of nerve compression caused by a herniated disc or is due to the compression exerted by spondylo-arthritic osteophytic alterations or ligamentous hypertrophy (the latter case occurs mostly at the cervical level, while at lumbosacral level prevails radicular involvement by herniated disc compression).

The cervical radiculopathy causes pain that radiates from the neck to the upper limb with a distribution that depends on the involved root (dermatomal distribution). To the pain in the affected dermatome, is often added the appearance of tingling (paraesthesia) and lack of sensitivity (hypoaesthesia).

The same symptom occurs by compression of the lumbosacral nerve roots, with pain radiating from the buttock to the lower limb.

The use of MRI of the spine is currently the fundamental test in the diagnosis of cervical and lumbosacral radiculopathy. It should be noted, with great simplicity and accuracy the site and the cause of radicular suffering. Recent studies have shown that MRI abnormalities are evident even in up to 50% completely asymptomatic individuals. Therefore it is possible the risk of a false positive exam or an overestimation of damage. In fact, it is common practice to see patients with small hernias but with marked pain and patients with massive hernias with, however, a more mild pain.

The primary aim of the EMG in cervicalgia and sciatalgia is to confirm the interest and the degree of the neuropathic involvement of the root suspected in pain symptoms.

The second objective is to exclude (or highlight) the symptomatology that is due to a problem going beyond the radicular location, (a C7 radicular pain may have symptoms similar to compression of the median nerve in the wrist).

Electromyography has certain advantages over MRI in some conditions:
-when a radicular pain is clinically probable but MRI shows no abnormalities. Some examples would be the diabetic radiculopathy and the herpes zoster radiculopathy.

-when you highlight a discrepancy between the MRI results (as we said can sometimes be falsely too sensitive) and the clinical data.

-when the disease may be multifocal (radicular abnormalities and concomitant alterations, as in the aforementioned case of carpal tunnel syndrome or compression of the ulnar nerve at the elbow).

Electromyography highlights abnormalities of functional character, while the MRI shows off structural abnormalities. It follows that the two tests are not mutually exclusive, but rather are perfectly complementary.
For these reasons, in case of cervical and lumbosacral pain, it is always advisable to integrate the diagnostic process with both morphological study (MRI) and than with functional study (electromyographic examination).