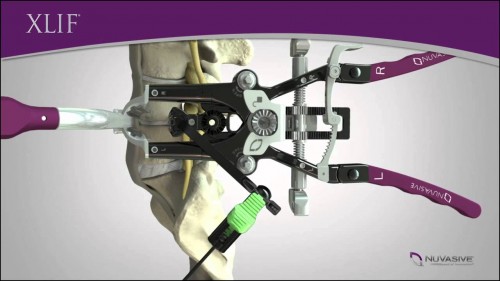 Low back pain (LBP) is a relevant cause of disability in the US and in Europe. It seems that 70-80% of people has at least one episode of LBP during the life.

In the majority of cases, according to our experience, about 75% of patients with symptomatic lumbar disc herniation improve with absolute rest, followed by neuro-muscular rehabilitation and weight of loss if necessary.

The discal herniation represents the first step of the so called “Degenerative Cascade”: the progressive loss of the physiological water content of the intervertebral disc associates with fissuring of the annulus fibrosus, resulting in prolapse and/or extrusion of the nucleus pulposus into the spinal canal.The remaining 25% are those patients who have not advantages from conservative treatment and therefore will have to receive surgery, which consists in microdiscectomy with removal of disk herniation and foraminotomy, with nerve root direct decompression. In a small percentage of cases (1 to 5 of this 25%), the removal of the herniation has to be associated to the positioning of a support that gives stability to the spine. This is due to the fact that the degeneration of the disc interspace involves a biomechanical variation of the spine, generating an increase in mobility of each vertebral “mobile unit” (formed by two vertebrae and the intervertebral disc between them) involved in the degenerative process.

This is the second step of the degenerative cascade called “phase of instability”, which is the basis of the framework of the physio- pathological spondylolisthesis. The answer to thwe instability often is represented by the thickening of the ligaments and bones and joints which undergo a substantial increase in volume, narrowing the diameter of the spinal canal.

This is the third step of the degenerative cascade known as “reactive phase” that determines the physio-pathological picture of the spinal stenosis.

In case of young patients, who are in the second or third step of the degenerative cascade, nowadays it is preferable to use a device that is not too stiffening the spine, allowing to preserve as much as possible its dynamic functions.

The replacement of the intervertebral disc with an “artificial disc” (total disc replacement) is one of the latest surgical procedures to treat back pain. Similar to the hip or knee joint replacements, it is possible to substitute the degenerated disk with a bio-mechanical device, the disc prosthesis. Therefore, the device has the aim to give back motion to the spine by replacing the degenerated intervertebral disc.

There is a growing popularity of the use of “lumbar disc prosthesis” (total lumbar disc replacement: TDR) in young and active patients. Several international scientific publications documenting as also in the case of sports patients, some of whom professionals, TDR allows: a) a significant and lasting relief from back pain in over 90 % of subjects , b) a resumption of sporting activity within the first 3 months in 35% of cases and 6 months in the remaining 30%, with an average peak performance after only 5 months, c) a significant improvement of athletic performance in more than 80% of patients.

The surgical procedure for the placement of a prosthetic lumbar disc usually involves an incision, more or less extensive, in the abdomen: with this approach, the organs and blood vessels must be moved from and manipulated (with a number of possible complications), to allow access to the spine.

A recent and less invasive method provides to insert a disc prosthesis by using the same lateral mini-invasive approach that is used for the ” XLIF ” (Extreme lateral interbody fusion), a technique developed to minimize complications, sometimes associated with more traditional approaches. The XLIF uses a retroperitoneal – transpsoas corridor, with a direct approach to the lateral surface of the spine, for the placement of an interbody device (between two vertebrae), with a constant intraoperative neurophysiological monitoring of the lumbar plexus. Using this technique we can reduce the operative time, blood loss, and post-operative complications, improve cosmesis, shorten the hospital stay and to speed up the recovery time.