Explaining The Hidden Meaning Of Michelangelo’s Creation of Adam

The Creation of Adam (1508-1512) on the ceiling of the Sistine Chapel has long been recognized as one of the world’s great art treasures. In 1990 Frank Lynn Meshberger, M.D. described what millions had overlooked for centuries — an anatomically accurate image of the human brain was portrayed behind God. On close examination, borders in the painting correlate with sulci in the inner and outer surface of the brain, the brain stem, the basilar artery, the pituitary gland and the optic chiasm. God’s hand does not touch Adam, yet Adam is already alive as if the spark of life is being transmitted across a synaptic cleft. Below the right arm of God is a sad angel in an area of the brain that is sometimes activated on PET scans when someone experiences a sad thought. God is superimposed over the limbic system, the emotional center of the brain and possibly the anatomical counterpart of the human soul. God’s right arm extends to the prefrontal cortex, the most creative and most uniquely human region of the brain.
The brilliant Italian Renaissance artist Michelangelo Buonarroti painted magnificent frescoes on the ceiling of the Vatican’s Sistine Chapel, laboring from 1508 to 1512. Commissioned by Pope Julius II, Michelangelo performed this work himself without assistance. Scholars debate whether he had any guidance from the Church in the selection of the scenes, and what meaning the scenes were to convey. In the fresco traditionally called the Creation of Adam, but which might be more aptly titled the Endowment of Adam, I believe that Michelangelo encoded a special message. It is a message consistent with thoughts he expressed in his sonnets. Supreme in sculpture and painting, he understood that his skill was in his brain and not in his hands. He believed that the “divine part” we “receive” from God is the “intellect”. In the following sonnet, Michelangelo explains how he creates sculpture and painting and how, I believe, God himself gave man the gift of intellect (1) :

After the divine part has well
conceived
Man’s face and gesture, soon both
mind and hand,
With a cheap model, first, at their
command,
Give life to stone, but this is not
achieved
By skill. In painting, too, this is
perceived:
Only after the intellect has planned
The best and highest, can the ready
hand
Take up the brush and try all things
received.

The sculpture and painting of Michelangelo reflect the great knowledge of anatomy that he acquired by performing dissections of the human body. His experience in dissection is documented in Lives of the Artists, written by his contemporary, Georgio Vasari (2).
Vasari says, “For the church of Santo Spirito in Florence Michelangelo made a crucifix of wood which was placed above the lunette of the high altar, where it still is. He made this to please the prior, who placed rooms at his disposal where Michelangelo very often used to flay dead bodies in order to discover the secrets of anatomy . . .”

The Creation of Adam fresco shows Adam and God reaching toward one another, arms outstretched, fingers almost touching. One can imagine the spark of life jumping from God to Adam across that synapse between their fingertips. However, Adam is already alive, his eyes are open, and he is completely formed; but it is the intent of the picture that Adam is to “receive” something from God. I believe there is a third “main character” in the fresco that has not previously been recognized. I would like to show this by looking at four tracings, Figures 1 through 4, and by reviewing gross neuroanatomy, using works by Frank Netter, MD, illustrator of The CIBA Collection of Medical Illustrations, Volume I — The Nervous System. 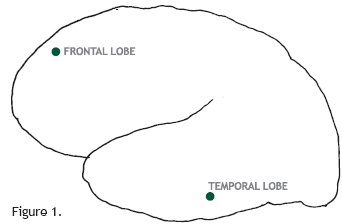 Examine Figures 1 and 2 to see if there is any similarity between them. Examine Figures 3 and 4 and decide if these figures are similar or dissimilar. Take enough time inspecting the figures so that your mind may form its own image of them. 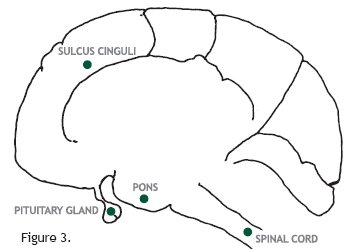 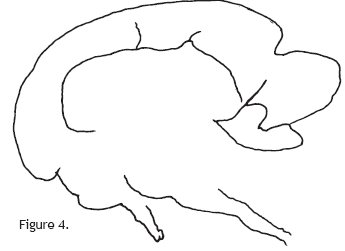 Proceeding to the neuroanatomy, Figure 5 shows a saggital section of the skull; the brain, which lies in the cranium, takes its shape from it. Study the picture to gain an overall impression of the shape of the cranium. Figure 6 shows the left lateral aspect of the brain and illustrates the sulci and gyri that are present in the hemispheres. The fissure of Silvius, or lateral cerebral fissure, separates the frontal lobe from the temporal lobe. Figure 1 is a tracing of this illustration. 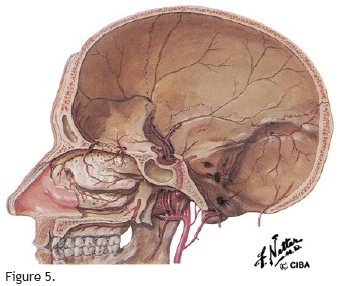 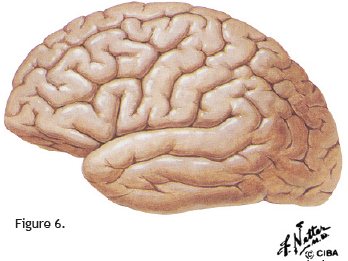 Figure 7 depicts the medial aspect of the right hemisphere; Figure 8 is a tracing of the brain and spinal cord portion of this illustration. The sulcus cinguli separates the gyrus cinguli from the superior frontal gyrus and paracentral gyrus. The parietal lobe is divided into the cuneus and lingular gyrus. The pituitary gland is seen lying in the pituitary fossa; the fact that the pituitary is bilobed can be seen grossly. The pons, the bulbous upward extension of the spinal cord, is noted. Immediately in front of the pituitary gland is the cross section of the optic chiasm. Figure 3 is derived from Figure 8 by removing both the cerebellum and the midbrain structures inferior to the gyrus cinguli and rotating the spinal cord posteriorly from the standard anatomic position. 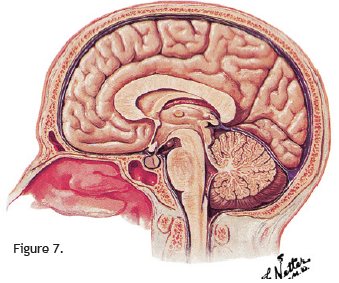 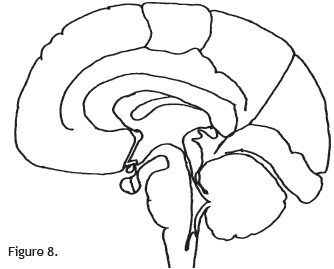 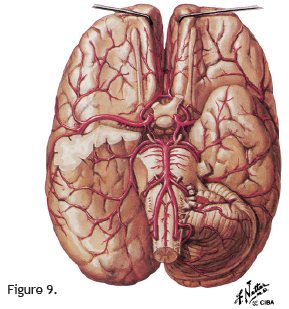 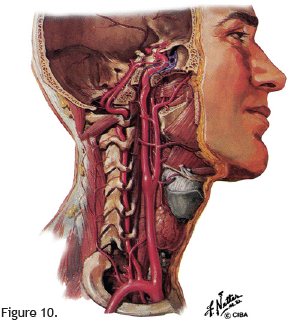 Having studied these images of neuroanatomy, proceed to Michelangelo’s Creation of Adam (Figure 11) and look at the image that surrounds God and the angels.

This image has the shape of a brain.

Figure 12 shows that Figure 2 is obtained by tracing the outer shell and the sulcus. Figure 13 shows that Figure 4 is a tracing of the outer shell and of major lines in the fresco of God and the angels. Therefore, Figures 1 and 3 are tracings of neuroanatomy drawn by Frank Netter, and Figures 2 and 4 are tracings from the Creation of Adam by Michelangelo.

The sulcus cinguli extends along the hip of the angel in front of God, across God’s shoulders, and down God’s left arm, extending over Eve’s forehead. The flowing green robe at the base represents the vertebral artery in its upward course as it twists and turns around the articular process and then makes contact with and proceeds along the inferior surface of the pons. The back of the angel extending laterally below God represents the pons, and the angel’s hip and leg represent the spinal cord. The pituitary stalk and gland are depicted by the leg and foot of the angel that extends below the base of the picture. Note that the feet of both God and Adam have five toes; however, the angel’s leg that represents the pituitary stalk and gland has a bifid foot. This same angel’s right leg is flexed at the hip and knee; the thigh represents the optic nerve, the knee the transected optic chiasm, and the leg the optic tract.

The important point, however, is not to identify minute neuroanatomic structures in the fresco, but to see that the larger image encompassing God is compatible with a brain. Michelangelo portrays that what God is giving to Adam is the intellect, and thus man is able to “plan the best and highest” and to “try all things received”.

The above article appeared in the October 10, 1990 edition of JAMA®, The Journal of the American Medical Association, Volume 264, No. 14.